"Katz has written a tightly-strung story... in an intriguing but credible scenario of superstition and myth. Readers will be immediately drawn to these characters whose design and dilemmas are constructed through tellingly unadorned action and dialogue, without the contrived and cloying characterization to which young readers are too often subjected."
-- School Library Journal, starred review, November, 1988.

"Complex currents surge through Katz's story, but even though the final pages provide us with plenty of insight into Laney and Tom and their realization of the significance of their lives, False Face does not fade when the last line has been read. ... The vibrations of this many-layered novel hum in the reader's mind for days after."
-- Quill & Quire, October, 1987

"... a thundering good read... This well-plotted and absorbing tale of human and magical relationships is, itself, a spellbinder."
--The Toronto Sunday Star, November 22, 1987

"The author combines a riveting story of the supernatural with a sensitive portrayal of the problems caused by divorce and racism."
-- School District of Philadelphia, 1989 (?)

"... an interesting novel with enough suspense to keep the reader involved until the climax."
-- Voice of Youth Advocates (VOYA), February, 1989

"This complex novel deals with ethical dilemmas, issues of historical right, painful problems of alienation -- from affection, from place. It is a powerful, thoughtful novel which builds to a frightening climax. It is not a novel for the the timid. It is certainly one for the reflective."
--London Free Press, November 28, 1987

"... this novel has a convincing reality which causes you to feel the monstrous potential of the mask. This is a tightly written, exciting novel which will keep 12 to 14 year olds on the edge of their seats."
-- Winnipeg Free Press, April 2, 1988 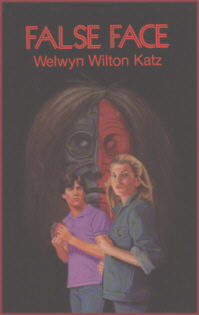 "A compelling novel about the power of ancient Indian myths and the nature of evil..."
-- Ottawa citizen, December 12, 1987

"The intensity of Welwyn Wilton Katz's vision certainly allows readers to enter her world, and to accept all the premises upon which it is constructed, without any doubts or sense of artificiality. Young readers will be enthralled..."
-- Canadian Children's Literature, Volume 50, 1988

"Laney, put-upon younger daughter, is the protagonist of this problem novel. Her parents' bitter divorce has left her confused and vulnerable. Her mother favors Laney's older sister; Laney's resemblance to her father seems to alienate her mother further. When Laney discovers a small Indian ritual mask and takes it home, it highlights the tensions between her mother, a successful antiques dealer, and her father, a professor determined to preserve Indian relics. Laney soon realizes that the mask and its larger companion mask harbor an evil power: it seems to be corrupting her mother. The strong resentments produced by the parents' soured love, divorce and Laney's own envy are presented carefully and convincingly. Katz welds the supernatural element onto the family's conflicts with grace and competence, offering a new view of a somber situation. Ages 10-14."
-- Publishers Weekly, July 29, 1988

"(Katz's) mastery of characterization begins on the first page of False Face; all we know of the characters springs directly from their words and actions, and their hidden malevolence is the true horror of this supernatural tale. ... This riveting short novel has two unusual features: fully-developed adult characters, though the focus is on the teenagers, and a respect and understanding for the Canadian Iroquois culture, including anthropological and ecological efforts to preserve it."
-- Mythprint, April, 1989

"Complex currents surge through Katz's story, but even though the final pages provide us with plenty of insight into Laney and Tom and their realization of the significance of their lives, False Face does not fade when the last line has been read. Katz is too good a writer to tie things up neatly, and the vibrations of this many-layered novel hum in the reader's mind for days after."
-- Books for Young People, Vol. 1, no. 5, October, 1987

"When 13-year-old Laney McIntyre finds a tiny wooden mask in a bog in London, Canada, Tom, a half-Indian boy in her class, warns her not to disturb Indian remains. He recognizes the larger companion mask that Laney's mother finds as an Iroquois false face, connected to a spirit whose power is both curative and destructive. As acts of supernatural vengeance begin to occur in the McIntyre home, Laney and Tom stuggle to unlock the secrets of the masks. Several conflicts here become intertwined: Laney receives the brunt of her mother's anger against her divorced father, whom she resembles; her parents' fundamental differences (one is an antique dealer, the other an archaeologist) clash over the problem of what to do with the masks. Meanwhile, Tom learns a valuable lesson about prejudice when he seeks help from his tribal elders. Katz's choppy prose, composed mostly of simple sentences and fragments, is not quite equal to the depth of the concepts she presents, and the jacket is dramatic but inaccurate in depicting of Laney. Still, an entertaining blend of the real and the supernatural. In an afterword, Katz gives references and tells how she got the idea for the book, providing a glimpse of the writing process to young readers."
--- Kirkus, Sept. 1st, 1988

"Thirteen-year-old Laney McIntyre is the image of her archaeologist father, and her mother, an antique dealer, takes out her dislike of her ex-husband on Laney. The antipathy between mother and daughter grows when two Iroquois false-face masks come into their home exuding evil and power. Katz is juggling a full load here: child-parent relationships, Indian customs and heritage, and a subplot concerning a half-white, half-Indian boy who has serious conflicts about where he belongs. It is a tribute to her skills that readers will be involved enough to follow the story to its dramatic conclusion. Research is evident, and the Ontario setting of this Canadian import is a plus."
-- Booklist, Vol. 85, No. 4, October 15, 1988

"In False Face Laney's alienation from her materialistic, judgemental mother, her conflicts with her sister, and her sorrow at her parents' divorce provide the weak place by which the power of the mask can emerge. Likewise, her schoolmate Tom's confusion about his dual Indian and European heritage allows a passage for ancient tragedy to be re-enacted. And it is entirely plausible. Katz is particularly effective in capturing the seriousness of family tension.
She is also powerful in her descriptions of the rituals of the Society of Faces that lie at the heart of the book. She writes in a strong clear style, avoiding pretension or melodrama. False Face is a welcome book, not just for readers in Scandinavia and South America, who may see it in their first glimpse of Canada, but for our own young adults who may well see in it their first glimpse of the stories that live in our landscape.
-- CM: A Reviewing Journal of Canadian Materials for Young People, Vol. XVI, NO. 6, November, 1988