"Readers (will) keep reading because of the flow of action and emotion, the deft description of the natural world, and the sympathetic characters... A well-written time-travel adventure."
-- American Library Association Booklist, May 1, 1995

"Time Ghost's tightly woven plot is as perfectly wrought as a Bach fugue in this gripping story of love and courage."
-- The London Free Press, Oct. 15, 1994

"Wrapped in an intriguing mystery ... the environmental message is delivered in a palatable and easily understood form."
-- City Parent, May 1995 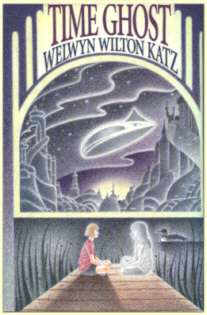 "... appealing tale of time travel, set in the 21st century with excursions to the year 1993. The environmental message comes through strongly, yet it stifles neither the characters nor the plot."
-- Publishers Weekly, May 1, 1995

"As the pages turn and the plot thickens, readers will make some interesting discoveries, not only about the future of the earth, but also about present conditions which are shaping the grim possibility of a destroyed planet. ... The book demonstrates the importance of human relationships."
-- Sarnia Observer, no date given.

"Obviously you don't need a complicated machine to travel through time. All you really need is a good book!"
-- Lancaster PA Sunday News, September 3, 1995

"This is a well-written, exciting story of friendship and discovery. A worthwhile addition to any YA collection."
-- Voice of Youth Advocates (VOYA), August, 1995

"In the year 2030 the world is completely different from the one we know today; most people live in block buildings and no one goes outside. Not that there is much of the outdoors left anyway, in fact almost the only real wilderness left in the world is at the North Pole.
Many people would love to visit the North Pole, to see what the outdoors is like. But for Sara, the idea is horrifying. Her grandmother is making Sara and Sara's brother Karl go to the North Pole with her so that they can try to stop businessmen from drilling for oil there. Sara can't believe she is being made to go, after all there must be all kinds of dangers; what if the air is not clean and they all get sick? What if they get skin cancer from exposure to the sun?
Finally Sara says she will go only if her best friend Dani can come as well. Sara's brother also wants to bring his friend Josh, who is Dani's brother. Since there are enough seats in their Puffhover, Sara's grandmother consents and they set off for the North Pole.
Once they get there, however, Sara and Dani find out that Josh and Karl are planning an experiment to travel through time! Dani wants to find out more about the experiment, but Sara seems to be afraid to go outside, and that's where the boys are.
Then something unexplainable happens and Sara and Dani are shot into the past. Dani is a time ghost and no one can hear her, but Sara is trapped inside someone else's body.
In this race to get back to their own time, Sara and Dani find out something about the past, something that could change the future.
The way the author presents the future is astounding and I love the characters as well as the plot."
-- The Gananoque Reporter, December 22, 1999

"This is an intriguing novel that combines time-travel strategies with a near-future setting. The world of 2044 is similar enough to our own to be frighteningly real, and the story's environmental warnings are clear. Placing Sara inside the body and mind of her young grandmother is a bold stroke that allows author Welwyn Wilton Katz to explore the emotional core of the story in many powerful ways."
-- Quill and Quire, Vol. 60, no. 11, November, 1994

"This time-traveller/host relationship, the rapidly moving plot, and the discovery of what one generation can teach another all make this novel compelling."
-- CM: A Reviewing Journal of Canadian Materials for Young People, Vol. XXII, No. 6, December, 1994

"An exceptionally well-executed time-travel matrix forms the structural heart of this novel about two girls, Sara and Dani, who, with their brothers and Sara's formidable grandmother, travel to the Arctic -- what's left of it, anyway. While there isn't enough room in this review to go into the details of how the time travel works, it in fact works very well indeed, and Katz brings the travellers back home (always a trick) with the same assurance."
-- Bulletin of the Center for Children's Books, Vol. 48, No. 9, May, 1995

"Gr 5-8-Sara, 12; her best friend, Dani; and their older brothers accompany Sara's grandmother, chief legal advisor to a Greenpeace-like environmental group, on a trek to the Arctic regions. Life in the 21st century is lived mostly indoors, since there isn't much safe, unpolluted outdoors left. That's fine with Sara, who experiences severe agoraphobia at the prospect of stepping out into the open spaces of the North Pole. Her grandmother, however, remembers the unspoiled wilderness of her youth and is determined to protect any that remains; and Dani longs to see real nature. Dani's brother hopes to experiment with time travel, theorizing that all time zones converge at the North Pole to create a dimension where all times coexist. It is the girls, though, who are catapulted into the past, Sara into the body of her grandmother at 12, and Dani into a nebulous existence as a time ghost. At this point the tone of the story changes from futuristic science fiction to old-fashioned time-travel fantasy. What feels like the distant past to the girls is 1993, the year Grandmother Green's father sold his land to developers. By living through the events that made the woman a crusader for the environment, Sara begins to understand her point of view. Then she and Dani must figure out how to return to their own century. Katz tells an absorbing story while delivering a serious ecological message."
--Susan L. Rogers, Chestnut Hill Academy, PA School Library Journal