Are angels real? Despite her best friend’s ridicule, young Becca thinks they are.  One night her two special angels spirit Becca and her mother away to a new city, where even their names have to be changed to protect them from Becca’s dangerous father.   The sudden loss of Becca leaves her former best friend vengeful.  What follows then is a consequence so terrible that it forces Becca to answer many important questions: what is real, and what only imagined, and in the end, which of the two is the most dangerous?

This hilarious short story for ages 10-12 pits Catharine Mundy and her brother J.L. against their dazed father who never seems to pay attention until the two children use a book of magic spells and ingredients that go totally and amazingly wrong.

"Unicorn" was the Canadian choice for Du Store Verden, (A Story, Please), the Save the Children book of collected short stories by authors and illustrators of international renown, one from each country with a Save the Children Fund branch. The stories were by authors such as Welwyn Wilton Katz, Margaret Mahy, Patricia Wrightson, Katherine Paterson, Michael Ende, Astrid Lindgren and Alan Garner. This project for Save the Children Fund International was chaired by Thor Heyerdahl. Its first publisher was Redd Barna, J.W. Cappelens Forlag, Norway, 1995. ISBN 82-02-15763-3. "Unicorn" was also published in Home for the Holidays, ed. Liz Benneian, a publication of The London Free Press, November 26, 1992. 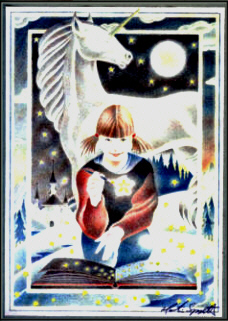 Martin Springett was chosen from all of Canada to paint the illustration for this story.


This moving short story for ages 8-11 is a tale of young Melanie whose father has left her mother, taking all the colour and warmth out of her life. One day, secluded in the library corner where she spends most of her time after school, Melanie encounters a painter with very special paints indeed. He is painting a mural on the library wall as a Christmas decoration, and asks Melanie what she would like to see him paint. In a kind of rebellion against the prevailing "Christmas spirit" that is so much not a part of her life, Melanie asks him to paint a unicorn. The painting takes a long time, and by participating in it day after day, both she and her mother begin to heal.

"You Can Take Them Back", a short short story which won the Grain Short Fiction Contest, and was published in GRAIN magazine, Winter, 1992 (Volume 20,#4), ed. Geoffrey Ursell. The judge, Bonnie Burnard, 1999 winner of the Giller Prize, chose it first from among over 400 stories.

The story is about the fragile relationship between an elderly woman and her daughter, epitomized by the crystal stemware purchased by one for the other.

"This is a story with an attitude. It's told in the first person; the voice, or point of view, is set up immediately and it holds throughout. The narrator thinks she's telling us about her daughter, but of course she's telling us about herself. She's not very nice, and I thought as I was reading, as I was intended to think: I bet the daughter would have a thing or two to say about all this, given a chance. But there was a perverse enjoyment in hearing just one side of the story, which is obliquely about marriage breakdown and the resulting confusion of loyalties. And I enjoyed the play between the narrator's tenacity and her fierce reluctance to accept change. The drinking glasses, all kinds of them, represent something other than glasses, of course, but there is no heavy-handed metaphor pushing us around. It's a soft metaphor, a metaphor gentle enough to open the reader to thoughts of things valued, and lost."
--Bonnie Burnard, judge of the 1992 Short Grain Contest

"Funeral in the Dark", London Free Press, fall 2006. The Great Blackout of August 2006 has an impact on the participants of a funeral in Toronto.

"Their Joyous Strain," The London Free Press, December, 1988. A pregnant woman and an annoying child get locked in a dressing room together on Christmas Eve. A poignant exploration of eternal motherhood.