Questions Frequently Asked About Welwyn Herself

First, I don't always write about the supernatural. Time Ghost and Whalesinger do not have elements of the supernatural in it. (They do have a kind of magic, though.) But of course, I often do allow the supernatural to sneak into my books (Out of the Dark), or to charge in (False Face). So I will try to answer your question honestly.

I write about the supernatural, when I do write about it, for several reasons. First, and most obvious, is that children and young adults are closer to that innocent state of being (babyhood) where everything is magical. Turning on a switch at the wall makes a light overhead come on. Wow! Magical! Then there's Santa and the Easter Bunny, which our Christian/secular culture positively encourages. Now of course my reading audience is mostly too old to think like that any more, but they haven't quite outgrown an imagination, and they haven't quite decided on exactly what is true and what is not true about the world (unless they've been "educated" by some very determined adults and forced to disbelieve in anything that can't be proven.) So for this reason, young adults of say, 12 and up, are very interested in magic and the supernatural. Life these days is difficult for many adults; young adults see this and don't want that for themselves. Many young adults are turning to the "supernatural" in various kinds of old religions and new ones, because they don't want their lives to have the big holes in them they fear will exist if they join the nine-to-five rat race. In summary, then, the supernatural, to many people (not just to young adults) is another way of looking at the world, and sometimes (not always) a comforting one. Either way it lends perspective to the world we live in.

In addition, the supernatural world is exciting and adventurous. Naturally a book is more fun to read if there are elements of such excitement and adventure in it. I saw my first "supernatural" site about 25 years ago in Scotland, a place called the Clava Cairns near Inverness. It is a stone circle (that is, a place where huge stones had been moved by prehistoric peoples into the shape of a circle) that also contained many burial mounds, or cairns, each of which looked a bit like an upside down pudding covered with many smaller stones. 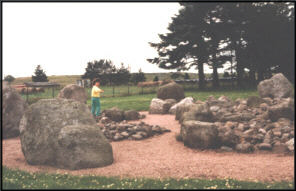 I knew that these ancient monuments were erected by people who had nothing but stones tools to move these gigantic stones, and their achievement seemed miraculous or "supernatural" to me. Ever since then I have been fascinated by stones circles, or single standing stones, or prehistoric stone tombs (these are called megalithic sites, after mega=large and lithos= stone. Here are pictures of three of my most-liked megalithic sites: Stonehenge, Avebury, and the Ring of Brodgar in Orkney off the northern coast of mainland Scotland. 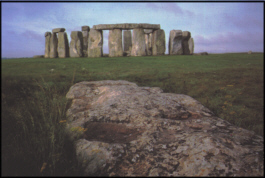 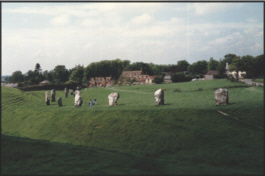 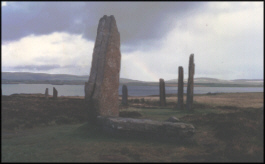 Many readers have noticed how often such stone circles or standing stones have a role to play in my books Sun God, Moon Witch and Witchery Hill being the two where megalithic sites have the most prominent role.

When I write about the supernatural (especially in my later books), it is not to titillate, but to expand and explore my deeply held belief that only by stepping just a little bit outside our own reality can we get any real understanding of that reality. All of my books which use the supernatural, place its elements just around the corner of reality. Ordinary people turn the corner, and they are there in their own world but suddenly their own world is a little (or a lot) different than it has ever been before. This helps them (and me) to understand our own reality from a different perspective.

Does the supernatural have a kind of imaginative reality or truth? Yes, I think it does. I have always believed that "nothing is ever finished." The supernatural hanging around in ordinary life in the form of myth and superstition proves this, to my satisfaction at least. I believe myths are statements of truths of what Jung would call the "collective unconscious" of humanity. (Some myths reveal some truths about some parts of humanity; others about others.) Because of this, when I use myth in my books (really, the truth is that I use myth rather than the mere "supernatural" in my books), I am trying to get at that deep past collective unconscious which tells us so much today about who we are and why we are what we are.

Do I believe in the supernatural? Yes, in some aspects of the supernatural. I believe in the Christian God. I believe that his son performed amazingly supernatural acts. (Here I am defining "supernatural" as being "impossible to understand by ordinary people or even scientists".) I also believe in prescient feelings, or even telepathy in rare circumstances. I am not sure what other elements of the supernatural I actually believe in. What I am sure of is that I don't know the truth about everything in this world, and that it is a rare person indeed who does (I have never met anyone who does. Have you?) And so I keep an open mind to the idea that there might be many things happening on this world that do not have a scientific explanation and might never have a scientific explanation, which leaves us with only the supernatural, as a kind of catch-all term that doesn't explain anything, but only groups together these inexplicable things.

Why did you choose to be an author instead of a math teacher?

I was a math teacher for seven years in a high school, and I liked the students a lot, but I didn't much like all the administrative things that were required of me. In addition to that, I got a bit bored with teaching the same subject year after year. If I had taught English, or history, or something like that, I probably wouldn't have got bored, because there are so many things to work with in English or history. But Grade Nine math is always Grade Nine math, and Grade 12 Math is always Grade 12 Math. I started making the courses I taught harder for the students by inventing lots of new questions for them that weren't in the textbooks. This was good for me, and in a way, good for the students, because they learned a lot more from my difficult Grade 9 or Grade 12 math course than they would have if I'd kept straight with the textbook. However, to keep me interested, I kept having to make the courses harder and harder, and this was definitely not fair to the students. The ones that stuck with my courses learned a lot and learned it well, but there were a lot of students who just couldn't handle the level of difficulty. Eventually I realized that I couldn't keep on doing this.

In the meantime, I had discovered fantasy novels. I didn't discover writing them, but reading them. The Lord of the Rings, the Narnia books, some of C. S. Lewis's science fiction for adults, David Lindsay... I loved it. But there wasn't nearly as much fantasy being written then as there is now. And the kind I liked to read was even more limited. So I just decided one day that I should write the kind of book that I liked to read.

I started writing while I was still teaching math, but I found that I just didn't have enough concentrated time to write and teach as well. So I took a year's leave of absence from teaching to write full-time, then another year. Finally I took the plunge, and quit my teaching job completely in 1979. It was another four years after that before my first book was published. Altogether six years of my life was an apprenticeship into the world of professional writing. This seems like a long time, but it isn't really. Think of doctors, or lawyers, and how long they have to go to school. I didn't go to school. I learned to write all by myself, in long, lonely, lovely weeks at my desk over those six years, making mistakes and learning how to fix them. I never took a writing course. I just wrote, and read good books to see how other good writers dealt with the problems that came up in my own writing. I don't think, really, you can be taught how to write. You can be taught how to make your own writing better, but first, you have to write, and write, and write. That's my theory anyway.

What is it like to win the Governor General's Award?

A rush! They treat you like royalty, with champagne before and after the ceremony, and a fabulous dinner with almost as many different wines and wait-persons as there are diners. The ceremony itself is like a dream. The head of the Canada Council is there, and the Governor General herself (when I won, the Governor General was Jeanne Sauve). They read out to the audience what the jury had to say about your book and it is usually pretty wonderful. Then you have to give a little speech. Then not only does the Governor General give you a cheque (that's "check", for you American readers) for $10,000, as well she gives you something that won't ever go away: a completely unique hand-bound copy of your award-winning book, with a new cover in leather and enamelled with a design suited to the theme of your book, created by the Master-Binder of Canada, and inside they have added a special page with an inscription done in calligraphy signed by the Governor General saying that this book won the Award in whatever year it was (mine was 1988). Making it completely perfect, they then put it in a box specially made for your special unique copy of the book, which for me was a deep blue and had the title The Third Magic on it in gold. The picture below shows me, (well, my back, anyway,) as I accepted the award from Jeanne Sauve. 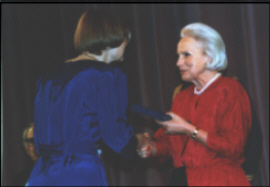 Of course this is a whole different world from my usual life, which is writing, giving talks, and writing. Below is a picture of me giving a talk to a well-prepared school north of Toronto, in Ontario, Canada. 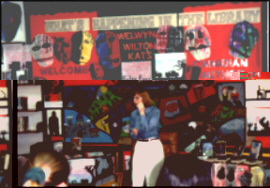