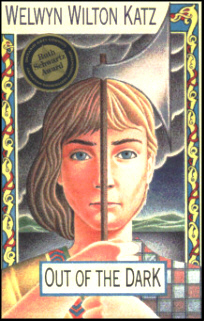 Out of the Dark

A friendless boy dreams of murder and Vikings.

After the tragic loss of Ben Elliot's mother, his father moves him and his younger brother Keith to a tiny village on Newfoundland's isolated northern peninsula. Ben's father had been born and brought up there, but Ben hates it. He's had to leave his friends in the city, and he's determined not to like anything or anyone in the new place. The kids in the village resent his attitude, and dangerous tensions rise. The only thing that makes the place at all bearable for Ben is its nearness to the Viking settlement at L'Anse aux Meadows, where he finds comfort in the ancient myths and sagas his mother had loved and shared with him. He revives his childhood game of imagining he is Tor, a young Viking shipbuilder. But as the Tor game grows increasingly real and harder to control, Ben discovers that the lines between past and present, and fantasy and reality, are beginning to blur, with frightening consequences. Seamlessly weaving Viking mythology and history with the present, this book is a deeply moving story about coming to terms with grief and forgiveness. It is Welwyn Wilton Katz's most emotionally powerful novel yet.

Comments on publication of Out of the Dark:

"This writer's control of her material, her subtlety, are things to marvel at."
-- Toronto Globe and Mail, November 11, 1995

Autographed copies of Welwyn's books for children and young adults may be ordered from the author.
Our Prices for Out of the Dark are $9.95 (PB) and $23.95 (HC). Go To Order Page