READER ALERT: As of July 1, 2010 there are NO legal electronic (ebook) copies of Beowulf by Welwyn Wilton Katz (illustrated by Laszlo Gal) available for purchase on-line. If you find this book advertised on the web with Welwyn Wilton Katz listed as the author, it is either a pirated work or it is from another source that is using Welwyn Wilton Katz's name without permission. Please do not buy these versions and support Welwyn's copyright to her work.

A new version of the famous legend for readers ten and up, with emphasis on the hero's humanity.

Recommended age: 10 and up.

This faithfully researched rendition of the ancient Anglo-Saxon poem about the mighty hero Beowulf focuses on Beowulf's young kinsman, Wiglaf. Through Wiglaf's eyes, ears, and his own cursed Gift, we are able to view the entire fifty-year story of Beowulf, a young man scorned by his uncle's court despite having the strength of 30 men. Beowulf must prove himself in the Kingdom of the Danes. The Danes have built their main palace in the wrong place, and because of that it is invaded nightly by a magically protected troll named Grendel, who likes to kill and eat the humans within. Beowulf volunteers to destroy the troll and the hag who is Grendel's mother (and much more powerful even than her son). The final heroic mission Beowulf must face is to kill a terrible dragon who is devastating his own land. In all these dangerous tasks the young boy Wiglaf watches, dreams, and finally, helps. 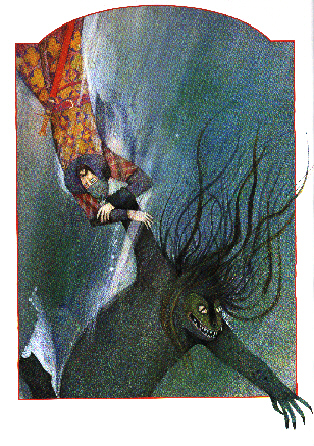 The 22 illustrations that accompany my story were painted by the distinguished Canadian artist, Laszlo Gal, whose own unique visions of Grendel, Grendel's haggish mother, and the mighty dragon whom Wiglaf must help Beowulf kill, will stay with the reader for a long, long time.

Comments on publication of Beowulf:

"Welwyn Wilton Katz's prose retelling of this poem is, quite simply, stunning."
-- Globe and Mail, October 2, 1999

"If this book is your first introduction to Beowulf, I can see it making for a long and fond acquaintance."
-- Quill & Quire, July 1999, starred review

"This is an absorbing, well-realized retelling of Beowulf, a welcome version for young children not yet familiar with this timeless epic to read and savour, or to listen to enthralled."
-- Books in Canada, October 1999

"The Katz-Gal Beowulf should become the standard version for a young audience. It's enthralling to read to older children, and is captivating for teens. But it reawakens the power of this old story for all readers."
--Canadian Children Literature, no. 97, vol. 26:1

"In this beloved retelling of a legendary epic, young readers follow the adventures of Beowulf, Wiglaf, and Aelfhere, all of whom are endowed with a different magical ability. Far from a gift, their magic is actually a terrible burden. Beowulf’s superhuman strength makes him clumsy and even overpowers his own weapons. Aelfhere’s ability to read minds reveals disturbing truths. And Wiglaf’s life-like dreams foretell disaster. Welwyn Wilton Katz recounts the Beowulf legend from the point of view of Wiglaf, who hears about Beowulf’s many adventures: the seven-day swim in which he kills nine monsters, the battle in the mead hall with the wicked troll Grendel, the underwater struggle with the sea serpents, and the confrontation with Grendel’s evil mother. Wiglaf doesn’t just hear about adventure — he even participates in the final battle with a dragon. Laszlo Gal’s magnificent paintings, vividly reproduced in the pages of this rich book, are some of his finest work. Based on the art of the Vikings, they have the brilliant color and sinuous line of an illuminated manuscript."
--From allsalebooks.com

If you wish to order autographed copies of Welwyn's books for children and young adults directly from the author,

"Thank you so much for your presentation at Sherwood Library. You were so dramatic and otherworldly, and the kids were keenly interested in the fate of Beowulf and his friends. It was very imaginative of you to dress up in period costume for your reading, and the recorder music added that little touch of the surreal. I hope you repeat this presentation for other audiences, because it made a stunning effect. I can see adults enjoying it just as much as young people, and you won't have a single whisperer to worry about!"--Kathleen May, Sherwood Public Library, Hamilton, Ontario, Canada 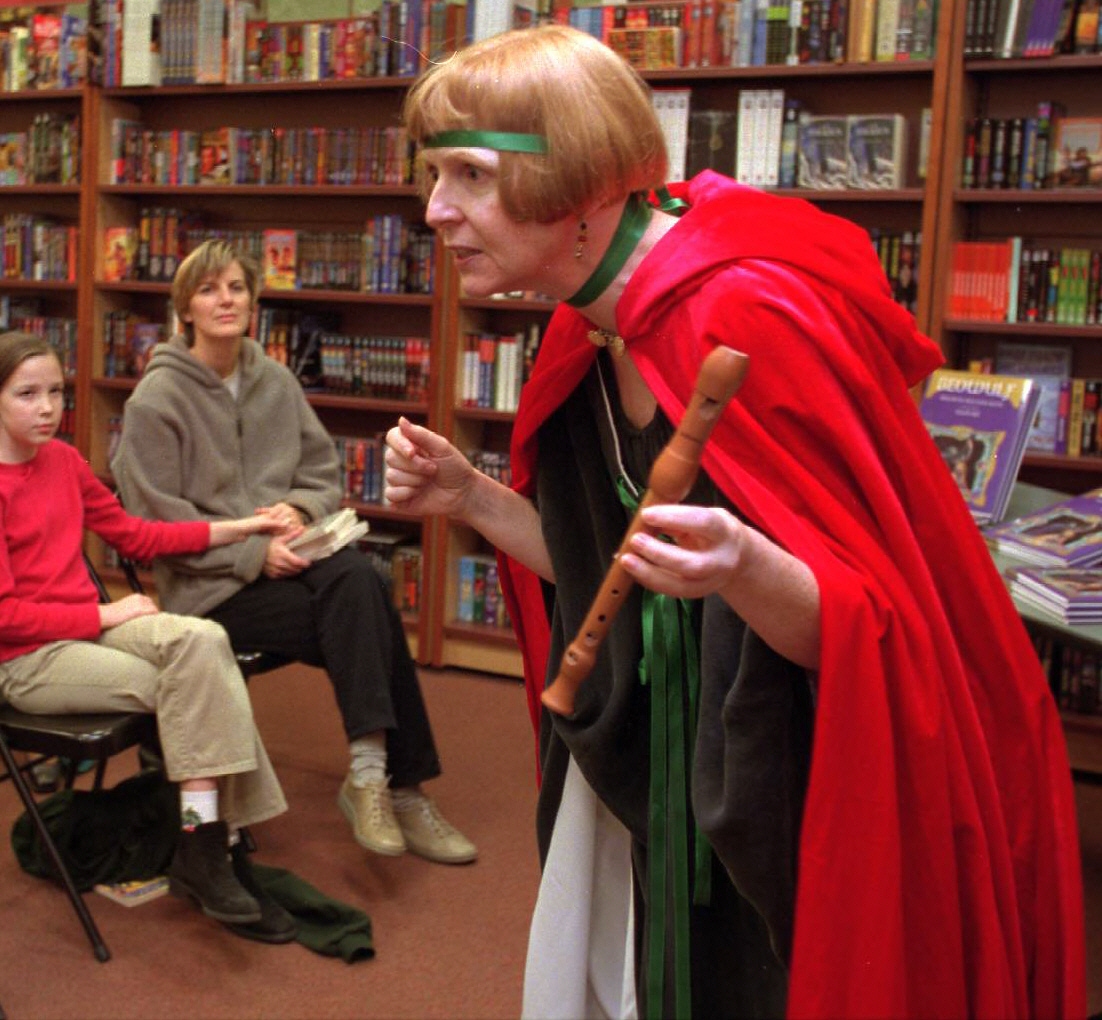 Welwyn giving a bardic presentation of Beowulf to an enraptured audience