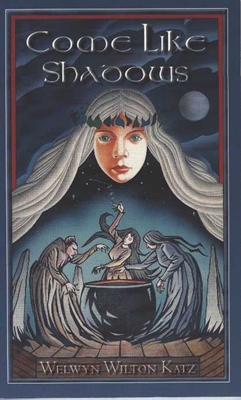 A young assistant and a junior actor at the famed Stratford Festival encounter the centuries-old curse that haunts "the Scottish play".

Recommended age: 14 and up.

Kinny is thrilled when she gets a summer job as an assistant to the director of a play at the Stratford Theatre Festival, but things go wrong almost from the start. The director is strange, the actors hostile, and one woman is killed in a freak accident during the very first rehearsal. Could it be that the play, Macbeth, really has a curse on it? Asked to find a mirror for use as a prop, Kinny finds an ancient one in a junk shop. The mirror has mysterious powers over both Kinny and her actor friend Lucas. Mesmerized, Kinny sees visions in it of a horrible old hag, while Lucas believes he sees the real King Macbeth of ancient Scotland, noble and great despite Shakespeare's later depiction of him. The two friends can't stay away from the mirror, however hard they try. Troubles mount on troubles as two mysterious women join the cursed production, women who seem to wield great power over Kinny especially. It becomes Lucas's task to protect Kinny from the two women and the third in the mirror, while Kinny tries desperately to keep Lucas away from the mirrored face he sees. In this carefully researched thriller steeped in the history of the real Macbeth, Shakespeare's Macbeth, and the modern-day productions of Shakespeare's play, it is a race against time before ancient hatreds can destroy both Lucas and Kinny when the two faces in the mirror confront each other at last.


From letters to Welwyn:

"Dear Welwyn. I just finished reading Come Like Shadows a few days ago and wanted to let you know what a wonderful book I think it is."
--Janet McNoughton, Canadian author. Letter March 28, 1996

“My mother gave me a signed copy of this book when I was a young teen. I remember how magical it was! I would love to read this again!” (Jennifer)
“I wouldn't've checked this book out if I hadn't thought I might like it. I just didn't know I'd enjoy reading it as much as I did. The characters were incredibly well-formed, and the plot moves quickly without becoming confusing. I couldn't put it down.  The pacing does feel a bit rushed at the end, and the ending seemed abrupt. Other than that, it was amazing.” (Clickety )

“Come Like Shadows” caught my eye but seemed geared for teenagers. I included it in this year’s Canadian reading theme and have to tell you: there is a lot more to this novel than mishaps at a play. It’s difficult to list why it’s very different than you can tell without reading it. Fiction always teaches me something about a place or a career but this is one of those stories that didn’t cease to educate me, very noticeably! Perhaps you know the feeling of coming away feeling glad you absorbed the contents. There are many layers: about William Shakespeare, ancient Scotland - which I didn’t know was called “Alba” - and even Québécois politics enter in. You see? This isn’t just an awesome adventure concerning witches but the mystical is there, too!
This came out in 1993, after ‘the Meech Lake accord’ and ‘free trade’ were debated and Québec sought separation from Canada. They lost, or were about to, at this time. The play’s director, a Québec Anglophone, drew parallels using French props. The protagonist is her friend’s daughter, a stage hand observing what a production is like. I admit belatedly learning what “Macbeth” is about and that he’s real! It’s interesting that Shakespeare altered history to avoid offending his king, a descendent of ‘Duncan’ who was the evil-doer; not the other way around. A modest rating is solely due to ‘have got’ contractions, which make me wince and stylistic incidentals that happened to be my kryptonite.
The fictitious portion was fantastic. The last day the actual Macbeth lived, he interrupted a spell and was stuck in a mirror! Welwyn Wilton Katz conceived tremendous detail, like ‘Kincardine’s’ dread when she sees she is being led to the Scottish town bearing her name, the site of the ancient stone circle.... “ (C. )

A Review of Welwyn Wilton Katz’s Come Like Shadows (Coteau Books, 1993)
By Derek Newman-Stille
As someone who has done stage acting, Welwyn Wilton Katz’ Come Like Shadows spoke to my experience of the stage, and added a little bit of magic in addition to the already potent magic of the theatre itself. Set at the Stratford Festival during a production of Macbeth, Come Like Shadows evokes the play between the ‘real’ and the ‘artificial’, bringing home the point to the reader that ‘truth’, ‘history’, and ‘knowledge’ are all as constructed as the stage – just sets and trappings of performance.
…
Katz brings the essence of Shakespeare’s play into a modern Canadian environment and a coming of age story, exploring the way that identity becomes subsumed by choices and the perception that there is a lack of choice. Like the clashing of Scottish and English interests in the play, she writes about a time when Franco-Canadians and Anglo-Canadians battled about notions of identity and the place of French Canada within an overwhelming Anglo majority. Like Macbeth, Kinny and Lucas feel that they are trapped into hopeless fate, their identities subsumed by a fate that they see as larger than themselves. Like the Scottish Play, notions of sacrifice and suffering end up being for nothing, never allowing freedom from the restraints placed on the characters....
If you are interested in reading a longer version of my review, you can check it out on Speculating Canada at http://speculatingcanada.wordpress.co.

Autographed copies of Welwyn's books for children and young adults may be ordered from the author.
Our Prices for Come Like Shadows are $10.95 (PB) and $20.95 (HC). Go To Order Page