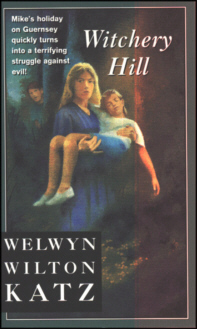 Two young friends battle the evil raised by a long-secret book of spells.

Each summer 14-year-old Mike Lewis joined his divorced father for a long holiday. This summer it was to be a visit with Mr. Lewis's old friend, Tony St. George, an American doctor who had settled down on the Channel Island of Guernsey and, after his first wife's death, married a Guernsey woman. Tony's daughter Lisa was a year younger than Mike but Mr. Lewis was sure they would get along fine. But that was not Lisa's idea. She made it clear that they would go their own separate ways, until Mike discovered that Lisa believed a coven of witches met each Friday night at a prehistoric tomb on the hill right behind Tony's house. Taught by his father that there is a logical explanation for everything, Mike could not at first accept the idea of real witchery, and certainly not that Lisa's new stepmother might be one of the witches. But as terrifying events began to occur Mike was torn between his father's logic and his own increasing perception of unexplainable but undeniable forces at work to destroy Tony and Lisa. In this spellbinding book that draws on the centuries-old tradition of witchcraft on Guernsey, tension and terror mount, sweeping the reader onward to the shattering finale.

Comments on publication of Witchery Hill:

"...Able to stimulate the senses as well as the intellect."
-- Canadian Book Review Annual, 1984

“Although I really enjoyed this book both as an adolescent and later, I think I got rid of it because it disturbed me so much to have witchcraft equated with Satanism in it. It is a fun horror thriller, pitting a normal boy against his evil stepmother - who in this case is REALLY EVIL. Great, exciting, climactic ending.” (Ruby H )

Autographed copies may be ordered from the author. Go To Order Page

Non-autographed books may be ordered from Amazon.com

©All Rights Reserved. Unless otherwise indicated, all website content (except comments by others) copyright Welwyn Wilton Katz. Educators need not purchase a license for use, if already covered by an Access Copyright permission.