In several of your books there are conflicts, misunderstandings, and even betrayals when the adult world meets with the child's world. In some of these conflicts, the adults come off rather badly. Is this the way the world is? Innocent children and irresponsible adults.

I wouldn't go quite that far. But one of the most important things about writing a book for children or young adults is to recognize that people of this age group are on a journey away from their parents into the world of their own adulthood. Relying on other people to do everything for you is a way to stay a child forever. I try to write realistic books (yes, even though there is usually a magical element in the books) where the young people in those books are realistically trying to learn to do things for themselves. Adults in such books might at most be able to give advice, which my characters must decide whether to follow or not; or they might be so unreliable or even absent that they can do nothing to help the character in any of the dangerous situations that occur.

I strongly believe that in a children's or young adult's book it is important for the child or young adult character to grow and change enough to deal with her/his problems on his/her own. If I do it well, the people who read my books take the courage and ingenuity of the characters into themselves and it changes my readers as well, making them more capable of dealing with problems in their own life (even if their problems have really nothing to do with the problems of the main character.) I had a letter once from a young girl in eighth grade who told me how scared she was about going into high school in a few months, but that whenever she got scared she made herself think of Morgan (my heroine in The Third Magic ) and how brave Morgan was in such dangerous and even terrible circumstances, and that made her feel braver about her own going to high school. This is how I hope my books can work for people. I was very happy to receive that letter.

I do a great deal of setting research for all of my books. This is because many of my books start with a setting that I have fallen in love with in the real world, a place whose history contains the "germ" of an idea for a story.

A typical example for this process occurred with my book Whalesinger, which took place in Point Reyes, California, a place I came to love for its isolation and oddities over the year that I lived in Berkeley when my husband was on sabbatical there. I researched the history of Point Reyes and found that on his famous voyage around the world Sir Francis Drake had almost certainly cleaned the bottom of his ship

The Golden Hind in this place that he called "Nova Albion" (New England) because it had white cliffs like those at Dover in England. I researched Drake's voyage and discovered he had with him a nobleman's young son whose brother was executed by Drake way down at the tip of South America after a trumped-up charge of witchcraft. Drake kept the boy alive and kept him with him, though the boy hated him, and probably Drake hated the boy as well. In the end, the boy got back alive to England and tried to bring Drake to justice for having killed his noble brother, but Drake had just brought back to Queen Elizabeth I tons and tons of Peruvian silver and gold, enough to finance England's treasury for years. And so the boy disappeared, and Drake was made a knight.

This was the germ of my story Whalesinger which is about a modern boy named Nick who hates someone for killing his brother, and also is about a treasure that Drake left behind in "Nova Albion" along with about a dozen men he decided he couldn't afford to feed on the rest of the journey back to England (this is true, and gives you some sense of the kind of monster Drake could be). Whalesinger is also about gray whales, whose racial memory (this part I made up, though it might be true!) cannot forget Drake and his role in Point Reyes, and how those whales' memory affects the present for a girl named Marty and for Nick, who learns from her and from the whales how to forgive and how to love.

Besides all the book research I did, I made many forays into Point Reyes itself, both during that years I lived in Berkeley and three years later, when I began to write Whalesinger and couldn't remember enough details about the natural environment. And so I made a week-long trip back to the area. I learned so much about the wildlife of the area and was so in love with the beauty of it, it was very difficult not to put too much in the way of setting details into the book. For instance, at the beginning of the book I really needed my readers to feel as if they were there, especially in the places where I had decided the camp would be where Nick and Marty and the other scientists would live. Here are two pictures that show the area. The first shows mostly the beach at Drake's Bay below the camp, with the "white cliffs" that made Drake call the area Nova Albion. The second shows much the same area but more to the landward side of Drake's Bay. Here you see the path over the headland leading down into the parking lot near the visitors' centre, and then continuing on up to the next headland. It is on that headland, roughly where you stop seeing the path (about halfway up) that I decided the expedition's camp would be. 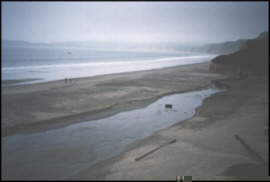 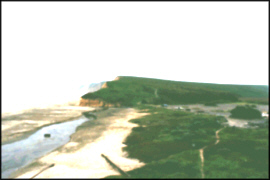 It is much easier to deal with setting later in a story, even when you are introducing new places. This is because you can "weave" setting details into the actions or dialog of characters. Then it doesn't seem like a description, and doesn't weigh the story down. An example in Whalesinger occurs when I introduce the anchor that is a monument to Sir Frances Drake in Drake's Estero. Two young people discover it, and they talk about it, so I hardly have to describe it at all. 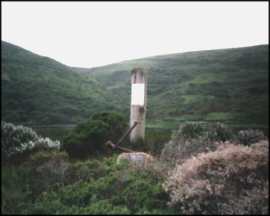 What is the role of feminism in your books?

Feminism has no place in my writing. I don't see males and females as unequal. There may be feminists who see my portrayal of some female characters as stronger than some male characters, and so take from that a political message. But I have also portrayed some male characters as stronger than some female ones (e.g. Lucas in Come Like Shadows, though enthralled by the man he sees in the ancient mirror, is stronger in fighting the three weird sisters than Kinny, who knows she is in peril yet thinks there is nothing she can do about it.) I just write my characters to be what they have to be, given their initial problems and their need to sort these problems out. I abhor the idea that female protagonists should represent the whole of female homo sapiens; or that male protagonists represent the whole of male homo sapiens. It is irresponsible writing to do such a thing. Characters are individuals, not representatives!

Are you going to write a sequel for... (Out of the Dark, Time Ghost, Witchery Hill, The Third Magic)?

No, I'm not planning a sequel for Out of the Dark. Ben's like my kid, all grown up and gone out to live on his own. I'm glad he exists, and that he will come and visit me from time to time in my mind, but his story is now his own. I've helped him to grow and change so that he can live his life happily from now on. That's all any mom (author) can do. Yes, I'm eventually going to finish my sequel for Time Ghost. The time travel mechanism I invented with the help of my daughter is too good to throw away. It must be used again. The sequel will be called "Ghost Gambit." It's an interesting idea to write a sequel for Witchery Hill. The ending just about cries out for it, doesn't it? I will think about it. Poor Lisa, if I just leave her there, with that book to deal with, right? Okay, I will think about it. I don't think I could write a sequel for The Third Magic, because at the end Morgan returns to her own normal life on Earth. But there is an awful lot of stuff in the middle of The Third Magic that doesn't get told, such as what happens while Mordred is growing up, and just how Morgan manages to take Arddu back to Nwm, and what happens when they get there, and how they stay alive there when they are about the only two Third Magic people in that whole world. Hmm. Interesting... No promises, though. The Third Magic was the hardest book I ever wrote. I would need a lot more energy than I have now to write another book set in the world of The Third Magic.

Do you often go exciting places to visit schools, or do you just visit locally?

I have been lucky to visit many exciting places as a guest author. Most recently, I went to Belgium. In one of the schools I visited there, in Malle, Flanders, they put me on a throne while they performed skits and songs invented in my honour, gave me 'bodyguards', and planted a Canadian maple tree in my name. It was just before Remembrance Day. I visited war memorials and the museum in Ypres (they call it Wipers). It was emotionally very powerful to see the original "Flanders Fields." Another school visit I made was to a school in Roselaire, Flanders, which was the site all the Allied offenses tried to free during the First World War. The students in Flanders all have read my books in Dutch and they speak much better English than I do Dutch! I spent quite a few days at the Antwerp Book Fair as well. Belgian chocolates are delicious. All in all, it was a great experience. Here's a picture of myself and my two bodyguards at the school in Malle. 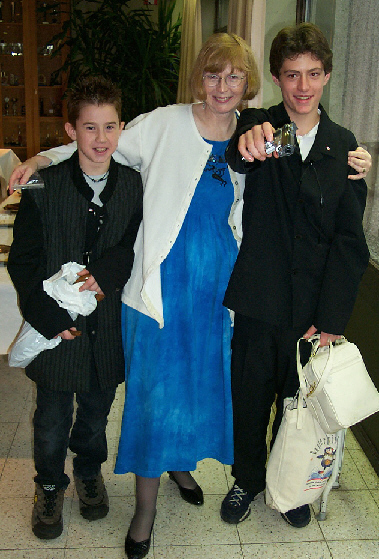